Malware, or malicious software, has always existed in tandem with technological advancement. As computers and mobile devices get smarter, so too do the threats that plague them. 2017 was another banner year for cyber threats, from the WannaCry ransomware attack in May to NotPetya in June, and the Equifax, Yahoo, and Uber data breaches throughout the fall. These headlines reinforced the unequivocal need for improved cybersecurity, in a threat landscape that is constantly evolving.

How MalewareBytes are Changing

Which types affect consumers, and which target businesses?

MalwareBytes, an internet security firm specializing in disinfection and protection solutions and a Gartner "Visionary" in Endpoint Protection Platforms, may offer some insight. In their "Cybercrime Tactics and Techniques: 2017 State of Malware," MalwareBytes researchers tracked the progression of cyber threats throughout the year. Looking at detection rates for both businesses and individuals, the report provides a compelling macro-view of 2017, while forecasting emergent threats in 2018. These were the most eye-opening things we read:

Before diving into specific high-impact types, it is worth considering overall malware trends from the past two years. MalwareBytes groups these threats by target: businesses and consumers. Looking first at businesses, these shifting threats reveal much about malware success rates, and hackers' adaptation.

When comparing years, the most notable shift is the increased prevalence of ransomware in 2017. Moving from the 10th to 5th most detected threat, ransomware attacks increased by 90% for business customers. MalwareBytes attributes this to ransomware families such as WannaCry, Locky, Cerber, and GlobeImposter. They found: 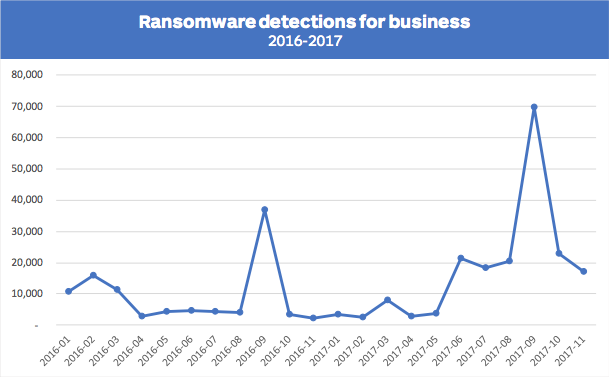 There were also increased rates of banking Trojans, spyware, and hijackers targeting companies. Unlike traditional ransom demands, these types of malware harvest "data, login credentials, contact lists, credit card data, distribute more malware, and spy on a victim for information about the business, to dig deeper into the network."

Of course, consumers also bore the cyberthreat brunt. Here are the top ten detected threats for 2016 and 2017.

MalwareBytes reported that "overall threat detections for consumers rose 12%" in 2017. Ransomware eked out a place in the top ten, with detection rates up 93% over 2016. However, it is adware that has emerged as the most persistent threat to consumers. As per the report: 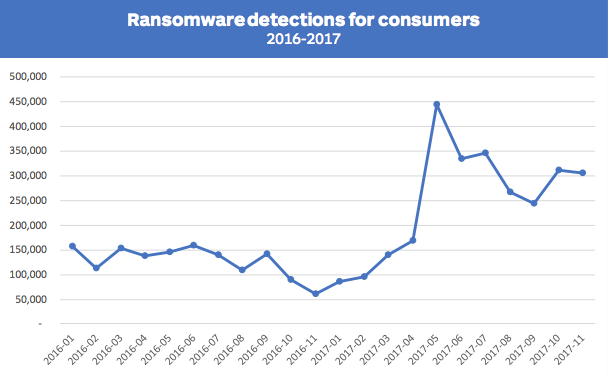 There has been an overall shift away from locked browsers, towards phishing emails and malvertising, which would account for the upswing in adware. MalwareBytes noted that "there's been a lot of clickers and bundled adware getting into the Google Play Store." Both Google and Apple stores have reported an increase in adware and malicious apps. Malvertising is particularly effective, as there is "difficulty in reproducing the attack for analysis."

In 2017, ransomware monopolized summer news headlines. WannaCry detections surged 375% percent from August to September. Between July and September, there was a 700% increase in overall ransomware detection.

That said, MalwareBytes found fewer types of ransomware at play, noting the "development of new ransomware families grew stale." The majority of attacks were perpetrated by a select few ransomware families, which hold the market share. These families have either crushed darknet competition with the quality of their product or have cultivated "a special relationship with the holders and herders of malicious spam botnets and exploit kits", the primary means of distribution.

In light of many high-profile ransomware attacks, there has also been greater adoption of anti-ransomware technology. As companies and consumers increase backup precautions, while implementing threat and protection standards, MalwareBytes reported "fewer cases where the ransom is paid." And cybercriminals have taken notice. In light of pro-active security, "it is more economical for criminals to utilize crypto-miners, ad fraud malware, and good old-fashioned credential stealing ransomware", all of which have seen a boom in 2017. 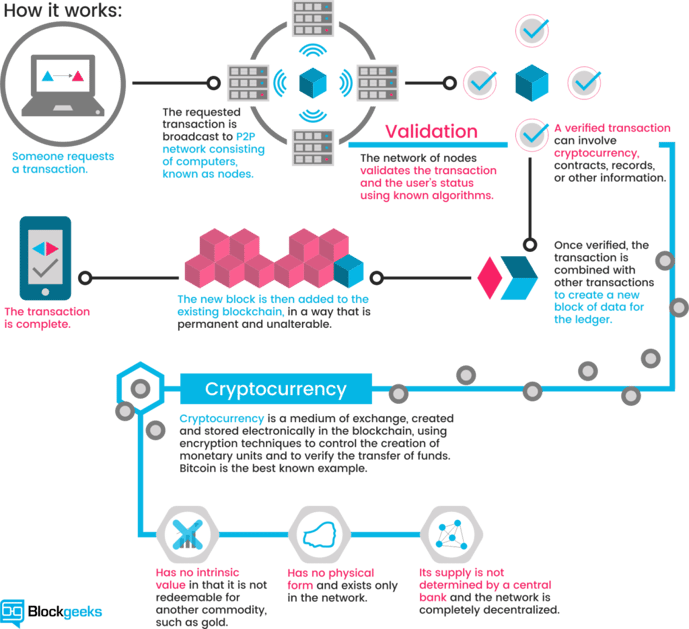 Crypto-mining becomes malicious when it involves "any method that uses the system resources of an unsuspecting victim in order to mine." MalwareBytes has noticed an increase in attacks using crypto-miners, as well as a diversifying attack approach. New methods include:

The range of mining tools is only expected to grow throughout 2018. MalwareBytes predicts the inclusion of new mining platforms "such as android and IoT devices, and new forms of malware designed to steal cryptocurrency."

This also correlates to the uptick in hijacking detections. MalwareBytes reported a 40% increase in hijackers, with attacks focused on businesses rather than consumers. As per their definition "Hijacker malware interacts and modifies victim browser operations to push advertisements, redirecting the browser to third-party search engines or shopping site." From there, the hijacker may install additional malware, or steal sensitive personal information.

In response, companies have been more aggressive about ad-blocking. Google, Mozilla, and Microsoft all support varied blocking tools on their respective browsers. However, the costs associated with "meaningful security in ad vetting and sales" still prove a hurdle to the elimination of malvertising. MalwareBytes predicts that malvertising and adware will continue to pose a considerable threat in 2018. 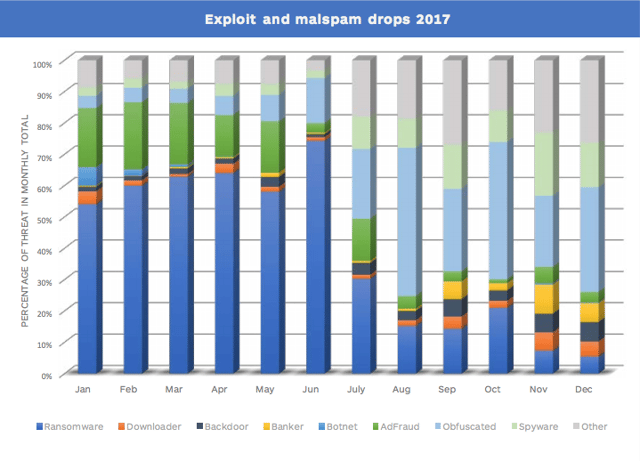 This increase also parallels a boom in banking Trojan detections. In previous years, banking Trojans had been something of a slow-growing threat. However, there was an average 102% increase in detections in the second half of 2017. MalwareBytes suggests that "the same campaign that was pushing the spyware was also pushing the banking Trojans." They concluded with the expectation to see "a continued steady stream of spyware for consumers and more big spikes against businesses in 2018".

Trends in cyberthreats have seen an overall shift towards social-engineering-based attacks. Social engineering works by manipulating people into volunteering confidential information, whether it be personal, or business related. Historically, this form of manipulation has proven easier than finding ways to hack software. As such, there has been a decline in the detection of exploit kits. These kits run on web servers and are particularly adept at pinpointing software vulnerabilities. MalwareBytes also attributes their decline to "the browser market share and the development of (or lack of) web exploits". Those that were active in 2017 were found predominantly in malvertising chains. From a macro-perspective, exploit kits simply aren't providing hackers the same degree of mass-scale efficiency.

The most successful businesses recognize that proactivity and longevity go hand in hand. In today's world, there is no substitute for a well thought out, customized cybersecurity posture. Don't let the growing threat of cybercrime distract from your company's goals, profits, and prospects. For assistance developing, or implementing, tailored security plans, contact an iCorps expert.